A Character Review – Fall in Love with Morayo!

BY CATHERINE MAVEN – I guess I have a thing for quirky older female characters. The primary narrator of this novel, Like a Mule Bringing Ice Cream to the Sun by Dr. Morayo Da Silva, is a Nigerian woman facing her seventy-fifth birthday, not with trepidation or regret, but with excitement and a joy of living in her beloved San Francisco (though she sometimes pines for Lagos). 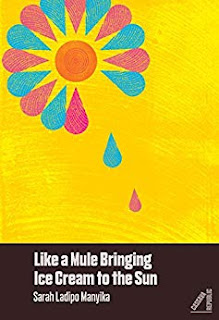 In this cleverly-written book, we have to piece together that Morayo isn’t entirely rational – she’s losing her memory, and sometimes confuses past events with the present. But she doesn’t care! She’s still driving her sports car, Buttercup (named after her own childhood nickname), and flirting with the flower seller down the street. At least until she falls and breaks her hip and has to spend a few weeks in the “Home”.

Morayo reminds me of my own French-Canadian grandmother, Blanche. One day, we were called to the hospital because she’d had a heart attack and “Didn’t have long to live.” The next day, I went back to the hospital and she was back to her normal bouncy self, telling me, “Check out the butt on that orderly! I think he likes me!” – and then cackling her mischievous laugh. Now multiply that memory times the four times it happened! – and you’ll understand why I appreciate older characters who refuse to go gentle into that good night.

The book isn’t simple, though. It’s told through rotating first-person points of view that include many of the people who interact with Morayo over the course of a few weeks (the timeframe of the novel). You get to see Morayo through her own eyes and through the eyes of others. She’s dignified without being stuffy; she has intelligence without arrogance; and is wise but still naive. She indulges in erotic memories and fantasies – challenging our preconceptions about aging women’s sexuality. And she’s a retired English professor who used to be married to a diplomat, so she’s well travelled and well read. A very interesting character!

Like Morayo, author Sarah Ladipo Manyika was raised in Nigeria. Ladipo Manyika is also a Ph.D. who taught Literature at UC Berkeley and has lived in a number of countries. “Like a Mule Bringing Ice Cream to the Sun” was shortlisted for the 2016 Goldsmiths Prize, so I’m not the only one who loves this novel!

LaMBICttS isn’t a long book – more of a novella, at a mere 126 pages. I usually read two or three books a week, so most of my reading comes from my Kindle Unlimited membership. But after downloading a sample of this book, I purchased the Kindle edition ($2.99 in Canada) and consider it one of the best books I’ve read in a long time. If you’re interested in stories that take you inside other cultures and experiences, this book is well worth your time.
Find this book here!