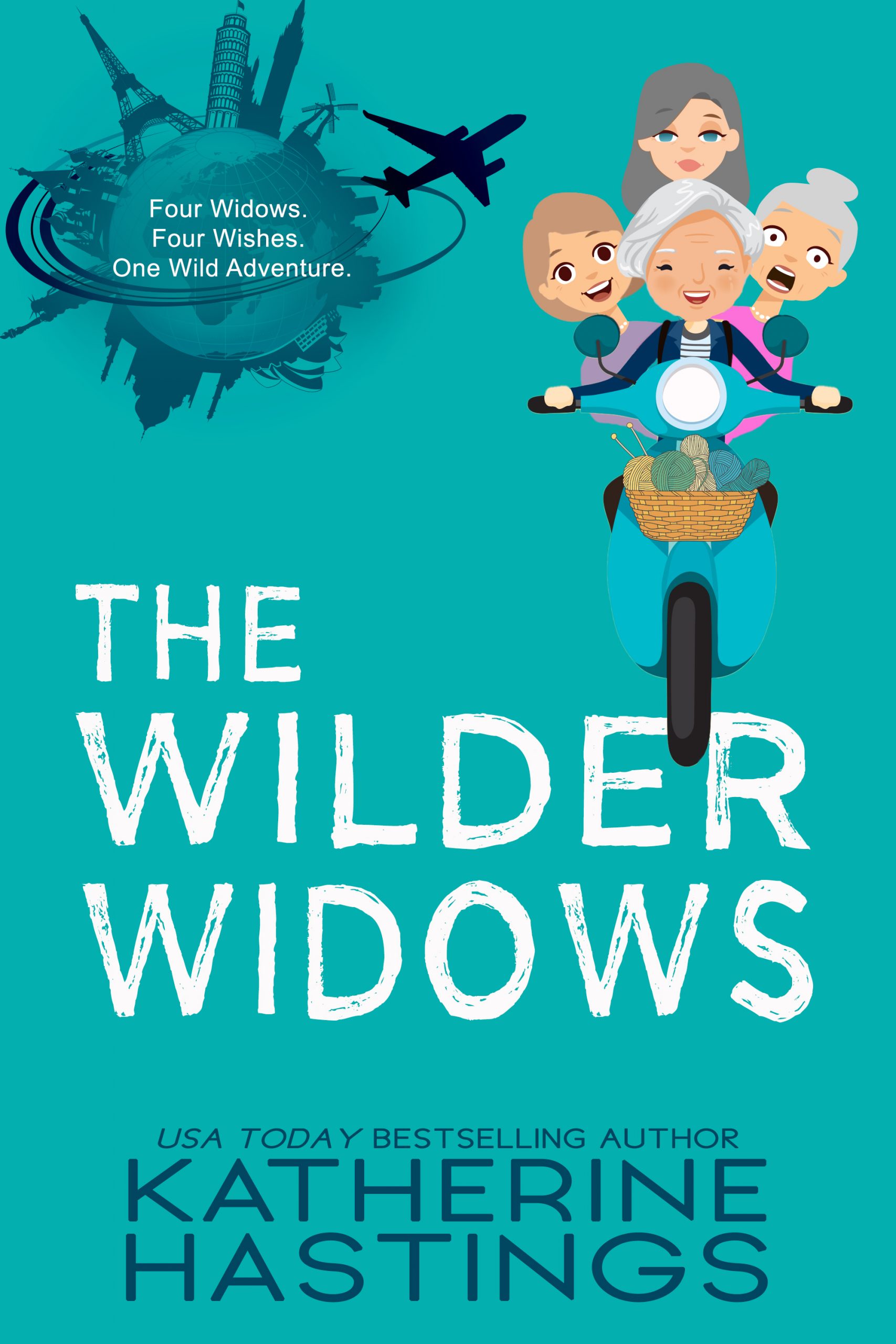 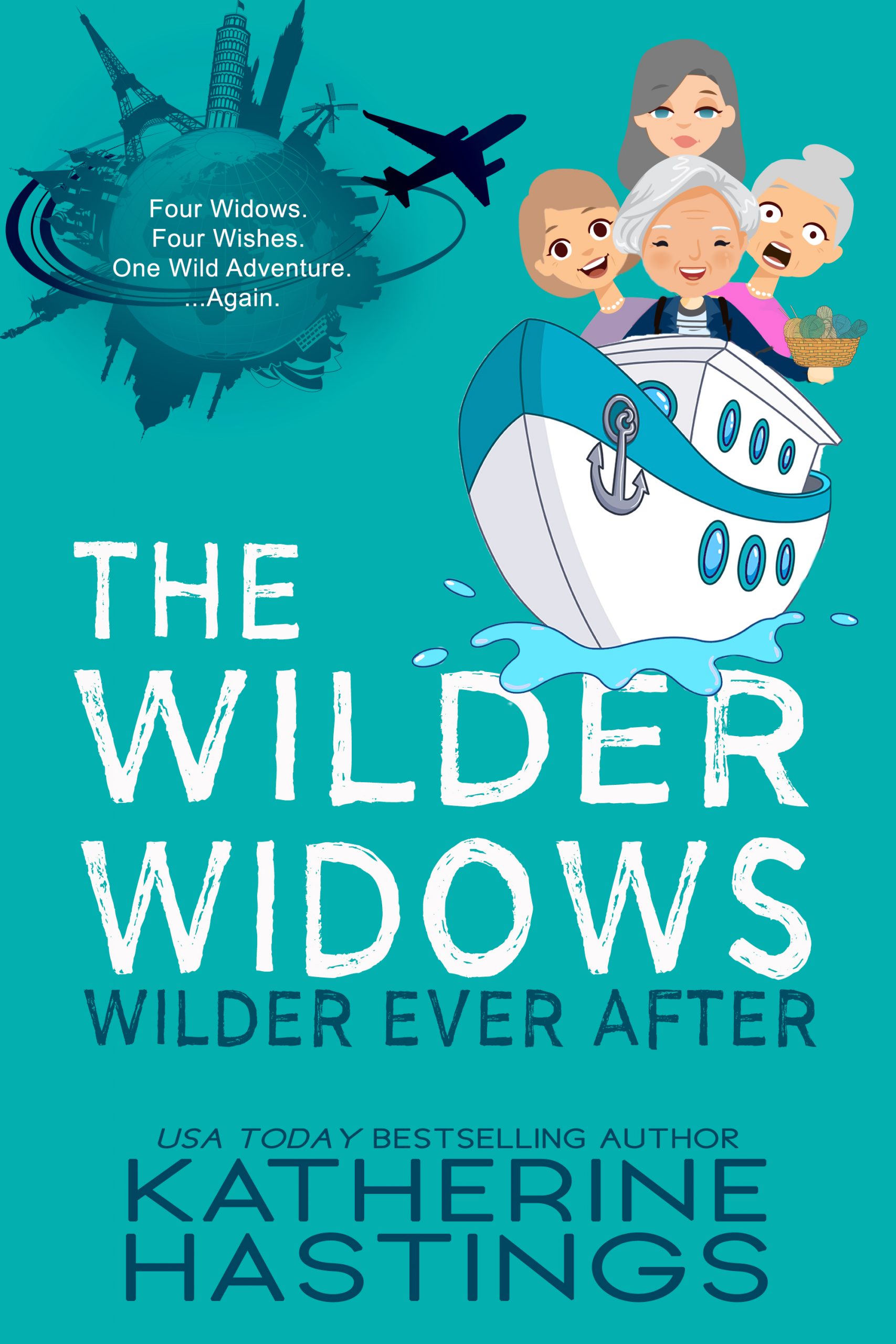 Meet Katherine Hastings, USA Today bestselling author of a lot of books! Here’s the latest of her two book series, The Wilder Widows – Wilder Ever After.

The Wilder Widows are back and wilder than ever! After completing their first set of wishes, Sylvie, Doris, Marge, and Alice reunite to fulfill their promise to each other. They must continue their new Wilder Widows annual tradition. Each widow gets one wish—one wild adventure—she’s dreamed of doing her whole life. The fabulous foursome will do anything and everything to help one another accomplish these lofty goals. Despite barely surviving their first attempt at satisfying their heart’s desire, they go for round two with unmatched courage and gusto.

Lots has changed for these four diverse women since they catapulted around the globe together, but one thing remains steadfast and true… their love for one another. With their newfound lease on life urging them on, the Wilder Widows set off once again on an epic journey together to push their boundaries and check a few more of those bucket list boxes as they push through their fears to hopefully make it back alive!

Please note, the author had no control over what the Wilder Widows said and did, and was only a spectator of their journey as she scrambled to write it down. They can get a bit mouthy at times, so the author apologizes if any of the widows say or do anything to offend you.

If you’re looking for a feel-good book full of laughs, order your copy now!

Please note, the author had no control over what the Wilder Widows said and did, and was only a spectator of their journey as she scrambled to write it down. They can get a bit mouthy at times, so the author apologizes if any of the widows say or do anything to offend you.

Katherine, thank you for being here!

My name is Katherine Hastings, and I am a USA Today bestselling author who spans multiple genres. I have eighteen published books that range from funny women’s fiction to epic historical romances. My first book was published in 2017, and I haven’t stopped writing since. When I’m not writing, I can usually be found at home with my husband on my little hobby farm surrounded by my menagerie of pets. I have two dogs, a crazy cat, four horses, seven ducks and two geese. They bring me countless smiles, and I’m often found sitting out in the yard writing my books with my animals all snoozing around me.

I have a terrible habit of not being able to pick a genre and stick with. But for me, the story comes first, and I tend to follow my inspirations and characters wherever they go. Most of my books start as a dream, and when I wake up with that story in my mind, I just can’t help but to let my fingers loose on the keyboard and write it all down. Sometimes its vampires, other times funny widows, and other times I’m off on an adventure with pirates or in an epic WWI romance. Though it may seem they don’t intersect at all, there is always a common thread in all my books. Laughter. I love to laugh, and no matter what genre I’m writing, my books always end up with some laugh out loud moments in them.

Given the ongoing popularity of chick lit, where do you see hen lit ten years from now?

I think it’s growing, and it’s growing fast. I can say as an author of multiple genres, the hen lit readers are the most voracious and the most passionate. When I got the idea for my Wilder Widows book, I wasn’t sure how it was going to be received. It’s a funny, quirky book about friendship and adventure at all ages, kind of Golden Girls meets The Bucket List, and it’s a bit tricky to find the audience for it. But when I did manage to get it in front of the right audience, I was overwhelmed by the response. I get emails every single day with readers who loved it and felt inspired by it. The incredible things this book has inspired women to get out and do just makes my heart swell to bursting. They’ve found new love, gone on dream vacations, started their own widows groups, and as one reader wrote me, “Realized my life isn’t anywhere near over and after reading this book, I got off the couch and started living it again.” It’s because of this passion the hen lit readers seem to have that I really think more and more writers are going to discover there are so many stories to tell about characters that aren’t’ twenty… and there are so many readers who want them.

I always loved writing since the time I was a child, but I never dreamed being a writer could be a reality. When I had knee surgery and had time to burn sitting in bed with my leg in the air, I wrote my first full-length book, a World War I romance. I just started writing it with no real intentions other than to get the story I couldn’t stop thinking about out of my head. When it was finished, I was honestly stunned. Me, a hobby writer of little bits and pieces here and there, had written a novel. Then I wrote another, and another… and I couldn’t stop. Idea after I idea kept pouring into my head, but now that I had finished one book, I knew I could do it again. Finally, I decided to see if a publisher was interested in one, and when I got that offer, I nearly passed out. A childhood dream I never dared to think could be a reality was coming to fruition.

My dreams. Honestly, every book I’ve written has started out as a dream. I wake up with a gasp, and there, like magic, are these memories of living, breathing people with a whole life waiting for me to tell it. It’s usually just bits and pieces, not the whole story at that point, but after I wake up with the characters in my mind, it isn’t long before they take over and start telling me their story.

I often joke that I’m not responsible for anything my characters say or do as I have no control over them. I’m just a silent observer running around after them as fast I can trying to write it all down. When I wrote the Wilder Widows books, the characters were so alive in my head that I would hear their funny conversations while I was just out trying to live my life. Once I was in the produce section of the grocery store and Marge popped into my head and said something so funny to Doris that I burst out laughing hysterically. When I caught the strange looks of my fellow shoppers, I tried, through gasps and tears, to explain that I’m not crazy and these widows that are living in my head just said the funniest thing. Yeah… because that didn’t make me sound crazier! LOL But my characters just suddenly pop in, and it’s up to me to listen to them and tell their tales, whatever they may be.

I tend to write in bursts. I can go weeks or months without typing a word when I’m between books, but then when I wake up with that idea for a story, with characters alive and racing around in my mind, I clear my day and type for hours and hours, often getting ten thousand words in a day. And then the next day the same, and the day after that. I write like crazy until that first draft is out of my head and onto the page. Then, completely exhausted, I collapse. I wrote a 100,000 page book in a week once, and I think I didn’t see straight for two weeks after that. LOL But after the first draft is done, I take a couple of weeks and let it sit, then I get to work editing at a much more reasonable speed of a few hours a day until it’s done.

Hope. I think most of my books convey hope in life and love and that there is always happiness just within your grasp if you’re brave enough to reach for it. I’m a terribly optimistic person who truly believes anyone can accomplish anything, and I think that really resonates in all of my books. In The Wilder Widows series, for instance, my books show that no matter the age, there is a whole world full of opportunities awaiting you if you just push yourself outside your comfort zone a little. Or a lot, as my widows do! LOL

Any advice you’d like to give for aspiring writers at this stage in life?

As I mentioned earlier, I truly believe anyone with a dream can accomplish it if they just put their mind to it and do the work. It’s not always easy and smooth, and you’ll hit as many roadblocks as you do open roads, but everything is achievable with a little grit and gumption. If someone has a story to tell, they need to sit down and tell it. Don’t worry about making it pretty at first. I think that’s what slows up and stops a ton of would-be writers. They get stuck on a sentence that doesn’t sound right and then they never get going again. Instead of worrying about it, just dump it out of your head, move on, and you can make it fancy later. Once I really grasped that idea, my writing took off at incredible rates and I no longer sat staring a blinking cursor feeling defeated. I think everyone has a book in them, and in my opinion, hens have the most stories to tell as they’ve lived such incredible lives and experiences already. I hope more and more writers of all ages find that drive to sit down and get out the story only they can tell. I can’t wait to read it.

You can find Katherine here: