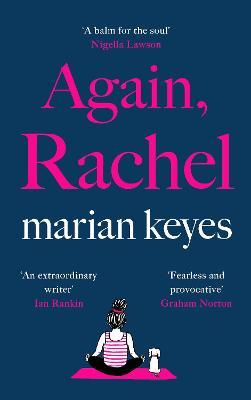 For over twenty years, Marian has been writing about modern women in the modern world. More than 40 million copies have been sold and her works have been translated into 33 languages. How is that even possible?!

She became known for her novels Watermelon, Lucy Sullivan Is Getting Married, Rachel’s Holiday, Last Chance Saloon, Anybody Out There, and This Charming Man, which, although written in a light and humorous style, cover themes including alcoholism, depression, addiction, cancer, bereavement, and domestic violence.[1]

In case you’ve had a hard time keeping with Marian, here are her books in order at Book Series in Order.

I’m absolutely delighted to have had the pleasure of interviewing the one and only, Marian Keyes! She’s been an idol of mine ever since I began reading grown up books and so I’m thrilled to be sharing with you some of her own favorite quotes, what a typical day is like for her and what she might have going on in the pipeline. Shhhh…

Marian, thank you for sharing all this with us today…

Fans of yours all over the globe love the Walsh Family. Are any of the five sisters based on any of your family members or friends? What about Mammy Walsh?
Thank you! None of the characters are based on any of my brothers or sisters but that dynamic of being part of a noisy, chatty family with a lot of big characters is definitely something I wanted to bring to the Walsh books. Mammy Walsh and Mammy Keyes have some similarities, basically that they’re both devout Catholics and play bridge, but Mammy Keyes is a much more gentle character than Mammy Walsh. To be honest, I think that putting a real person in a novel is a terrible abuse of power. It just seems so mean. I’d hate it to be done to me, so I don’t want to do it to anyone else.

What feelings does writing about the Walsh Family evoke for you?
Safety. Comfort. Pleasure. The feelings that being with my real-life family generates. I LOVE all of the Walsh sisters, and the parents.

It may be too difficult to chose, but do you have a favorite standalone novel, out of all the books you have written? Or perhaps a novel that you are most proud of? And what are the reasons for your selection?
I’m very proud of Grown Ups for several reasons. Structurally, it’s an ambitious book and although it took a lot of writing, deleting and moving stuff around, it actually works.

In terms of characterisation, there are SEVEN main characters and I think there’s a maturity in how I’ve written them – no-one is entirely good or bad. Four of these main characters are men and in the past I’ve been a lot more binary about my male characters – that they’re either ‘good’ or ‘awful’. In Grown Ups, I’m just treating them like the flawed, well-intentioned, complex humans they are.

The age range of my main characters – from 21 to 50 was ambitious and I feel like I’ve inhabited each of them accurately and conveyed their stance and concerns.

You mentioned in your At Home with Marian Keyes – August 30, 2020 you and Himself (Tony your husband, for those that don’t know) were considering a pet. Did you ever get one? And if you did, tell us more! And if you didn’t, are you still considering getting one?
We still haven’t got one and I feel so guilty! The thing is that I’m afraid of animals, but Tony ADORES dogs. Lockdown would have been an ideal time to get a dog- but everyone else had the same idea as us and it was impossible to get one (we wanted a rescue.) And as soon as lockdown lifted, I was thrust into huge busy-ness, so there hasn’t been the time. Someday, hopefully.

You have been very open and honest with your personal demons and past struggles, but I’ve got to ask, have you always been so wickedly funny and extremely charming in life and in your writing?
You’re absolutely lovely! But there’s no way I could answer that without sounding like a monumental show-off. But thank you very much.

I know being labeled as a writer of “ChickLit” doesn’t sit well with you. I’m afraid to ask, but as an aging lover of this lighthearted romcom ‘happily ever after’ genre, could you be a little open with the label “HenLit”? After all, we are older. Smarter. And still fun.
I absolutely love being ‘less young’. But I mind anything written by women being shunted away and boxed into a niche position. There are men who write about relationships and families but they’re not called DickLit or Bros Prose. Books written by women should simply be called Novels. Or Literature. When we treat anything created by women as a subset of something created by men, we continue to shore up inequality. A recent survey in UK showed that of books written by women, 89% of their readers are women… which means a whopping 11% are read by men.

Whereas books written by men? 55% of the readers are men, and 45% are read by women.

In your latest book, Again, Rachel, who would you cast if it became a movie or series?
May I have Keanu Reeves to play Luke? Please and thank you. In those circumstances, I think the part of Rachel should be played by me.

What line or passage in Again, Rachel, stood out for you the most? Do you have any other passages in your standalone books that really stand out for you?

“That was the great thing about being not-young: knowing through practical experience that feelings, even the worst of them, calm down and eventually ease. They’re probably not gone forever – that was another thing I’d learnt: the notion of ‘closure’ is unrealistic. If I’d felt an emotion once, it stayed on file for-ev-er and could be reactivated if the conditions were right – or more accurately, wrong.”

And this from The Woman Who Stole My Life.

“I’d always thought that you grew out of heartbreak, that the older you got, the less it hurt, until it entirely stopped having any impact. But I’ve discovered the hard way that heartbreak is just as bad when you’re old. The pain is still awful. Worse if anything because of – Zoe explained this to me – the accumulator-effect: the loss stacks up on every previous one and you feel the full weight of them all. But wailing and streeling around being heartbroken is a lot less dignified at my age. Once you pass 40, you’re expected to be wise, to be philosophical, to calmly settle yourself in your Eileen Fisher coordinating separates and say, “Better to have loved and lost than never to have loved at all. Camomile tea anyone?”

When did it dawn on you that you wanted to be a writer?
When I was thirty, coming to the end (although I didn’t know it at the time) of alcoholic drinking. My life was very small, very bleak and my glittering future was far behind me. Suicidal thoughts plagued me. Then I read a short story in a magazine, which was quirky and fun and a voice in my head said, You could do that. There and then I wrote my first short story and was delighted with it even though it was mortifyingly terrible. Four months later, I ended up in rehab and when I came out, I remembered how writing had made me feel and decided I’d pursue it.

Tell us what a typical writing routine looks like for you and how long does it take you from idea to the time you finish your final edit on most of your books?
It takes me at least 2 years between getting the idea for a novel and doing the final edit. I wish I was faster, but this is how it is. And certainly, as I’ve got older, I’ve less energy than I used to have. I write at home, in the spare bedroom, Monday to Friday. Mornings are spent working on whatever novel I’m lucky enough to have been granted by the universe, while afternoons are Any Other Business, of which there’s a lot (interviews, podcasts, etc.)

Besides getting lost in your writing and spending time with your family (especially your lovely nieces and nephews), what else do you love to do?
I read a lot, watch a lot of TV, especially subtitled Scandinavian dramas. Basically people being murdered in cold places is my favourite thing! Late-night on-line shopping is a particular delight – peculiar things often arrive in the post a few days later and I can barely remember ordering them. I live about a 30 minute drive from Nature, so walks there, up mountains or through forests is something that makes me particularly happy. Now and again, I decide I’m going to give yoga (yet another) try, but then I decide not to bother.

Any advice you’d like to give to aspiring writers today?
Just do it. Just sit down and write your novel. There’s this myth that novels are magical things, which essentially write themselves. Sadly, this is far from the truth. Your novel will be written when – and only when – you write it. (People hate me for telling them this.)

Your first efforts will APPALL you with their terribleness. That’s okay. Nobody writes a piece of genius, straight out of the gates. That’s what editing is for.

*Pretend that no-one other than you will ever read your novel, that way you’ll be fiercely honest.

*Write the book that YOU would like to read. Not what you think the market wants . Be authentic.

*Enjoy it. If you’re enjoying writing it, then there’s a good chance that others will enjoy reading it.

*You don’t have to write consecutively. Start anywhere. Write whatever scenes you know are important. It can all be stitched together later.

For your loyal fans, is there anything in the pipeline you can tell us about?
I haven’t begun writing another novel yet because I’ve been so busy with all of the promo. But! I’m very interested in the idea of writing another Walsh sequel. It was such fun to revisit them in Again, Rachel that I’m loath to leave them just yet. The sister that’s in my head most in Anna from Anybody Out There. So we’ll see…

Also, I have a podcast called Now You’re Asking with a fabulous comedian called Tara Flynn. We’re modern day agony aunts and the pod is warm, funny and (hopefully) helpful. It’s available on BBC Sounds (or wherever you get your podcasts) and our second series has just been recommissioned.

Do you think there’ll ever be a day when you’ll want to stop writing stories and why?
No. Honestly. The idea appalls me. I LOVE writing novels. I love working with words and I love having another world to disappear into, when the real one feels so sharp and pointy. I’m incredibly grateful that I’m allowed to do this job.

You can find more of Marian Keyes here: