Get to know Robin Delnoce and her new book Bunco: a Comedy About The Drama of Friendship! Recommended for fans of Bridesmaids, Desperate Housewives, and Bad Moms. Released September 2020! 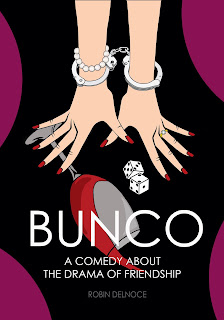 Tell us a little bit about yourself and your published book (s).
My name is Robin Delnoce, and I turned 50 in June. That milestone combined with a global pandemic and the death of a high school friend, forced me to look at my potential regrets if I suddenly left this planet. Having this story never see the light of day was the only one I could think of.Tell us about the genre you like to write, and how is it similar / different from other women fiction genres?I enjoy writing about women’s friendships. So often in movies or television shows, women are portrayed as competitive, backstabbing, and indifferent to other women. I did not have a close family so my friendships were always where I went for support. I like writing women characters who are strong, smart, and funny who love each other like family. I like using comedy to help demonstrate their bond and touch on more serious topics. I think my dialogue driven format helps immerse the reader into a group of friends they feel a part of. (I had a friend read my manuscript. A week or so later, she was telling me about a conversation she related to but couldn’t remember what friend she was talking to. It was my story! I felt, “mission accomplished!”)What are some of the biggest challenges authors of older protagonists face today?Unless you are Tom Cruise, the clock is always running on your relevance. My own children discount my opinions and experiences as “old school” and nonsense. I went to a Pet Shop Boys concert with my teenage daughter several years ago. She looked around and said, “Is this an old band?” I corrected, “No, it’s a classic band.” “ Well, everyone here is classic then.” She replied. (Little snot)Given the ongoing popularity of chick lit, where do you see light-hearted fiction for older readers ten years from now?I hope it’s stronger than ever! The world we live in is intense! I don’t want to dismiss just causes and serious issues, but we need a break to maintain our sanity! Light-hearted stories and comedy can recharge us and help us face more of the world’s daily struggles.When did it dawn on you that you wanted to be a writer?I started writing in junior high school. I wrote (scripted) dialogued stories in a “soap opera” kind of format for my friends. I really should have tried my hands at being a screenplay writer. That occupation was just too risky and saturated, so I got my degree in criminal justice… in 1992… in Los Angeles. (Nothing risky about being a police officer in L.A. in the early 90’s.) At least that criminal justice background came in handy for this book.Do you have a day job other than being a writer?I’ve had a series of careers over the past 25 years. I’ve done accounting, managed a running store, and worked at an elementary school. I was just getting back into accounting when the pandemic hit.What are some things that inspire you to write?Two things really… my actual life (friends and family) first and foremost. And I spent the past 10 years destroying my body participating in endurance events (marathons & triathlons.) That horrible life choice provided me with thousands of miserable hours of solitude to develop these characters and storylines.What is your typical writing routine like? Have you ever seen a smoker who shouldn’t be smoking?That is what I was like writing. I would sneak away or wait for everyone to vacate the house before I sat down to write. I was embarrassed that I was “wasting my time” with this activity that meant so much to me. I did most of my story outlining and dialogue set up while busy during the day, then I would close myself off in my room and pull out my computer. I’m sure my husband thought I was having an affair because I would abruptly close my laptop when he entered the room. **Fun fact: Round 4 of Bunco was completely outlined while I sat in an airport waiting for the friend I based the character, “Anne” on.**What kind of message do your book (s) convey to readers?

Girlfriends are a precious commodity! They should be invested in and appreciated and not easily thrown away because of “mishaps” or misunderstandings. Our relationships with our family, co-workers, and spouses all come with different levels of stress and expectations. Our friends are there to celebrate, complain, cry, debate, grow, and especially laugh with. Hold onto them… tight.

Does your book (s) incorporate certain aspects of your own life (and / or that of others)?
Well, running and the misery that comes along with it plays a small part. I have had several friends who I consider closer than family, but they were never all part of the same circle like the characters are in this story. I make an acknowledgement at the end of the book referencing the actual incident that was the inception of this story. If I say too much, it will give away some of the plot, but trust me when I say, it was weird!

Who are some of your favorite authors and why?
Diane English, creator of Murphy Brown and Callie Khouri, writer of Thelma & Louise. I love the character of Murphy! She is a flawed person who uses humor to mask her pain and destructive decisions. Characters like that create puzzles the audience is forced to put together. And when you arm the character with humor, it gives people a reason to continue to invest and care about them. The characters of Thelma & Louise are so well written! They are so different and grow so much. I think I was the only one in my circle who wasn’t furious at the ending. I understood the characters had reached a point of no return and it would have compromised the message of the entire film if they had gone back.

Any advice you’d like to give for aspiring writers over 40?
Okay… I think I’m probably the WORST person to give advice about writing, so I’ll give the two pieces of advice that I used to give to runners who came into the shop. I’d have new runners come to me, give me their running resume, and then ask if I thought they could complete a goal distance. I would always answer, “I do, but that doesn’t matter. You should never ask someone else what YOU are capable of. ” And… if it doesn’t scare the shit out of you, you’re not challenging yourself enough! 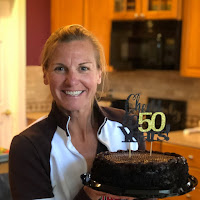 Robin Delnoce has the kind of sense of humor that would crush any political aspirations. Her off-color humor amuses most but offends a few, and she has been known to issue a post-party apology or two. After twenty years of being caught in her verbal crosshairs, her husband kindly suggested she shift her energies to a more constructive outlet.

To learn more, go to https://buncothebook.com/