Meet best selling author and humorist, Susan Reinhardt and get her
book Chimes from a Cracked Southern Belle – Winner of Best Regional Fiction and a Number One Amazon Bestseller! 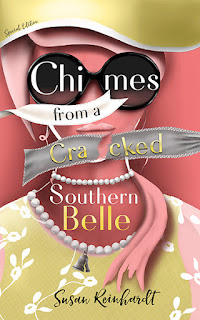 Tell us a little bit about yourself and your published book (s).I always loved writing, and in high school, wrote a play with my best friend. When it was time to go to college, I decided to study nursing instead of journalism and worked for a couple of years as a nurse’s assistance: Queen of the bedpan and Princess of enemas and changing Depends. Though I loved the patients, writing was my truest love so I changed majors and ended up with a journalism degree from the University of Georgia.

For nearly thirty years (yes, I’m an OLD hen), I worked as a columnist and feature writer. And while I worked, married, and had kids, I also penned a few non-fiction humor books⸺Not Tonight Honey: Wait Til I’m a Size Six⸺and others. My debut novel, Chimes from a Cracked Southern Belle came out in 2013 from a traditional publisher and won some awards, including the IPPY for Best Regional Fiction. I’ve recently re-published it under my own imprint, Collard Queen Press.

My latest novel, The Beautiful Misfits, comes out in the spring of 2023 from Regal House Publishing.

Tell us about the genre you like to write, and how is it similar/different from other women fiction genres?
I believe as a whole, my genre is women’s fiction. However, within the spokes of that large umbrella, rests the flavor I gravitate towards in women’s fiction. Which is humor topped with a dollop of romance. I do incorporate some of the main issues we women face in life, but always temper them with joy, comedy, and quirky characters. So, for me, I’d say Hen Lit sums up what I’m trying to do nicely.

What are some of the biggest challenges hen lit authors face today?
I believe the biggest challenge Hen Lit authors face is age discrimination. It’s almost the hush-hush frontier of prejudice and the one not many bitch and bellow about publicly. But we hens should be clucking. Other oppressed groups have rightly had their day of reckoning and reversal, and so should those of us facing ageism. I lost my job, along with most of my older colleagues at the newspaper when I turned 50. Whether it is publishing or any other job, age should never be an issue or a reason for exclusion. Women our age have buying power and loads of wisdom, so let us see ourselves in fiction!

Given the ongoing popularity of chick lit, where do you see hen lit ten years from now?
Chick Lit is popular, but those chicks in ten years are going to morph into hens. It’s a biological fact. And I believe there’s more than enough square footage in the publishing world to open its doors to older, more seasoned, and delightful women protagonists. Our issues are deep, universal, and our truths come with experience.

When did it dawn on you that you wanted to be a writer?
I knew I wanted to be a writer at age 11 or 12 when I was scrawny, bucked-toothed, and in love with boys who thought I was on the kooky side. And too flat-chested for their raging hormones. In my former house that was located in a small Georgia town near Atlanta, I would crawl in my closet, and open a secret door that led to an attic above the garage where I wrote the worst, angst-filled poetry ever penned.

Do you have a day job other than being a writer?
I spent thirty years as a journalist and columnist and then was polished off in massive company-wide layoffs affecting those of us nearing retirement. Ageism at its worst. I scrambled for a part-time job to supplement my writing and got hired by Lancome, a company that does NOT discriminate and employs many older women. I worked with Lancome as a makeup artist for about six years until the pandemic hit. Now, I write full-time.

What are some things that inspire you to write?
I love reading other writers for inspiration, and when I’m stuck, I’ll pick up a novel and dig in. I also take classes, mostly online, and hang out in writer’s groups such as the Women’s Fiction Writers Association and others. Lots of inspiration comes from oceans and mountains, nature in general, funny things that happen, and news of the weird and eccentric. I do a lot of people watching.

What is your typical writing routine like?
I try, now that I’m not working an office job, to write at least four or more hours a day. I get up, have a cup of coffee, and scroll through emails, news, etc, then settle in with a second cup of creamer-drenched coffee at my laptop. Some days, I’ll be here for eight hours. But on weekends, I slack off and hang out with family and friends. I still try to put in an hour or two on those days. Otherwise, I tend to become slightly grouchy.

What kind of message do your book (s) convey to readers?
I’d like my message to convey that strength, meaningful (and/or repaired) relationships, and a good sense of humor equal contentment and joy. And that no matter what’s happened – be it in the past or present – regrets and mistakes don’t have to linger. We can move past them, mainly by staying active, not sitting around and letting those blue and bloaty thoughts invade us. Love and laughter are the main ingredients in my writings.

Does your book (s) incorporate certain aspects of your own life (and / or that of others)?
Both. I borrow from my life, my family’s, and those around me, be they friends, acquaintances, or people I’ve read about in the news. Past experiences can be mulled, twisted, wrung, and mined for meaning and gold.

Who are some of your favorite authors and why?
I fell in love in my early twenties with Anne Tyler, which is ironic since she was in her forties back then. So here I was fresh out of college, reading the fabulous works of an author twenty years older than I was and yet relating to her words, though most of her protagonists were middle-aged hens. I also love Billie Letts, along with plenty of contemporary writers, from women’s fiction to thrillers, from chick lit to hen lit. I can’t get enough British humor in the vein of Sophie Kinsella. I also loved Confessions of a Domestic Failure by Bunmi Laditan who lives near Montreal.

Any advice you’d like to give for aspiring writers at this stage in life?
The most obvious is that it’s never too late to start. Sue Monk Kidd was in her fifties when Secret Life of Bees hit the shelves, her first novel. Also, if you let rejection turn you into a sad-sack Eeyore type, you’ll never make it. Throw on an armor of bling and let all the no’s bounce off without shedding a tear. Realize that it’s true what they say: It only takes one yes. Also, read every day, write every day, and play every day, if only for a few minutes.

Remember: wine, coffee, and chocolate are not the enemy. But lack of sleep is. 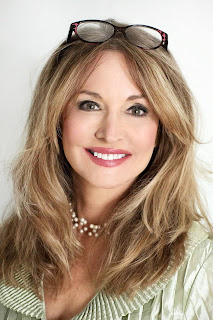 Get in touch with Susan here!